Lalgarh jattan is a big village in sriganganagar district of Rajasthan.it's established about two hundred years ago.It is said that a soldier lalkhan lived here.A pond was here in the North and the East direction.A large wall was all around the pond.the people called it fort.The soldier was very kind for this village.According to villagers once upon a time robbers came here.The soldier drove them out very hardly and after that he died.on that time they called him "jujhar sing".On his memory a temple was buit on his name.

After some time, In 1902 some Haryanvi People came here.they were "jaat".That's why It is called "lalgarh jattan".That time total circle of village was about fifty two thousand BIGHA.Time passed and population of this village was increased.The living circul was very short.tht time all agriculture land was 'BARAANI' There was no water for drinking.Some people were carried water for drink..they faced many problems.In 1961 this village connected to a link road.In 1964 they were very happy to have the water.they forgot their water problem.After that in 1968 The first bus was run between Sriganganagar to Hanumangarh.Electrilisim in 1964 after that this village progressed in short time.A post office opened in 1950.In 1976 this branch changed into a sub post office.After that,in 31st January 1972 State bank of Bikaner and jaipur branch opened here.First of all The Ganganagar kendriya Sahakari Bank was opened in 1982. 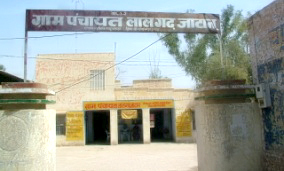 Panchayat of Lalgarh jattan is the most biggest PANDHAYAT in Sriganganagar District.and comes under Sadhul Shahar Panchayat committee.Many Small Neighbouring villages come under Panchayat of this village.The first Panchayat election held in 1953.In that election in 1953 Sh. Bhadar saharan elected the first SARPANCH of the village.In his period many work developed by government through first sarpanch.Like(1) Govt. sec. School,(2)Main road between Sriganganagar to Hanumangarh.(3)In 1954 first Electricity connection connected from Sriganganagar.