Sports in Lalgarh jattan have always been an interesting way of spending leisure time. In the past time kho-kho, Guli danda , Lal chari and others were the main activities.Time passed, the various kinds of sports played have changed considerably.The royal sports have been replaced in cricket, Handball , Basketball ,tennis and various kinds of aero sports.The landscape of lalgarh jattan has provided a golden opportunity for both the local and international kind of sports.Handball has also become an important part of the Lalgarhiya sports.The popularity of the game gaining momentum more and more young people are choosing besides other sports.

The Handball started in this village in 1980.A Math teacher Shri Raj kumar sharma"set up first step of handball in villege.The member of the first Govt.Sr.Sec.School team were:Sh.Richhpal,PrithviRaj Dhaka,Rajesh Godara,Shyopat Thori,Surender Godara,Jagdish Dowan and Vishnu Dutt Nehra (Goalkeeper) etc.After that late Richhpal Bhadhu (as a coach) started the best way of this game in lalgarh jattan in1988. At that time many National and international players shine self and village name not only in india but also in world leval.In 28 July 2003 Shri Richhpal Bhadu died and left the game lonely and village But the ground of Handball has given many National and International players to india.And this continuty still going on in present also.In 2005 The first district handball committee made by the main head of district Shri Prathvi Raj Meel,Jashvinder Gogi is (President),Shri Harbans Godara is (secretary), and Shri Ashok Bhadu (paymet head). 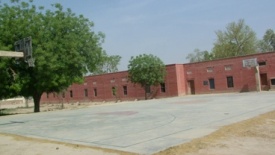 Basketball is The Second Most popular game playing by lalgarhiya players.The Basketball game started in lalgarh jattan in 1982.The first Govt.Sr.Sec.school team went in 1982 for play.Without any coach the game gave to lalgarh jattan many winner players.